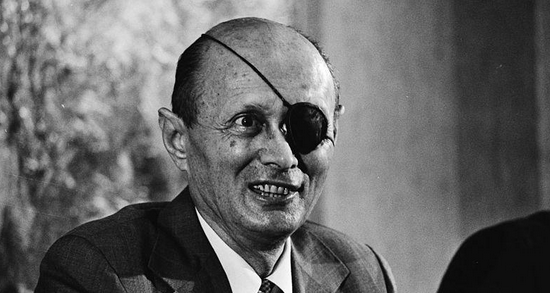 Moshe Dayan, Israel’s iconic military and political leader passes away from a heart attack at the age of 66 in a Tel Aviv hospital. Dayan was born in 1915 and raised in Nahalal. During the Arab Riots of 1936-1939, Dayan joined the special Jewish police forces as well as the night squads led by British commander Orde Wingate. While fighting with the British in 1941 in Syria against Vichy French forces Dayan was struck by a sniper’s bullet which resulted in him losing his left eye.

During the 1948 War of Independence, Dayan oversaw the defense of the Jordan Valley before being assigned as commander of the Jerusalem front in August 1948. After serving as head of both the Northern and Southern Commands of the Israel Defense Forces (IDF), David Ben-Gurion appointed Dayan as Chief of Staff in 1953. During his term, he contributed to making the IDF a more aggressive and modern fighting force.

In June 1967, on the eve of the Six Day War, he was appointed Defense Minister and emerged as a national hero following Israel’s victory. His reputation would be damaged however after the October 1973 Yom Kippur War, when still serving as Defense Minister, he was widely criticized for Israel’s lack of preparedness for the attack. The official investigation into the War’s handling by the Agranat Commission did not find anything wrong with his conduct. Dayan was not included in Yitzhak Rabin’s new government after Golda Meir resigned in 1974.

He would return to the government as Foreign Minister under Menachem Begin in 1977. As Foreign Minister, Dayan played a key role in the peace talks between Egypt and Israel which led to the 1979 peace treaty between the two countries.