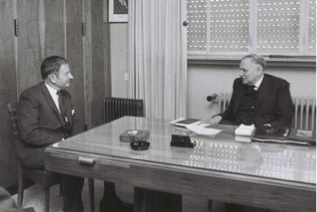 The Knesset passes the Bank of Israel Law by a vote of fifty-five to zero with fourteen abstentions.  The new law which became effective on December 1, 1954 established the Bank of Israel as the central financial authority for the country.  The Bank’s functions as outlined by the law were to, “administer, regulate and direct the currency system, and to regulate and direct the credit and banking system in Israel, in accordance with the economic policy of the Government.”    The Bank was allocated ten million pounds as its initial capital.

While there was a need to create a central bank with the establishment of the State in May 1948, the matter was postponed due to the urgency of the ensuing war and in favor of other more pressing needs.  A temporary solution, the Bank Notes Ordinance of 1948 was put into place in August of that year to issue currency in partnership with the Anglo Palestine Bank, later to be renamed Bank Leumi. The ministry of Finance assumed the other functions that would normally be the responsibility of a central bank.

In March 1951, the Minister of Finance Eliezer Kaplan appointed a special Committee for the Establishment of a State Bank.  In November 1952, the findings of the Committee were presented for discussion to the Cabinet which requested the aid of a UN expert to help define the final tasks and authorities of the Bank.  David Horowitz who had served as Director of the Economics Department of the Jewish Agency was appointed as the Bank’s first Governor.

In March 2010, the Knesset passed a new Bank of Israel Law which states that the Bank’s main objectives is to maintain price stability.