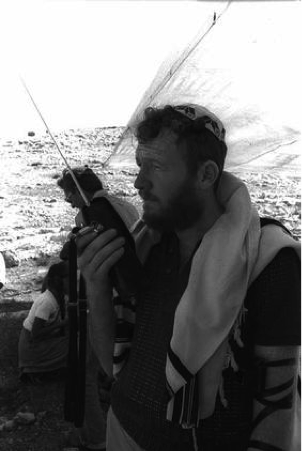 The 1970’s and 1980’s saw a growth of Jewish religious fundamentalism in Israel following the 1973 Yom Kippur War and the 1978 Camp David Accords.  Many of the fundamentalists lived in the West Bank and Gaza because they believed that Jewish law forbade Israel from relinquishing any territory.  One such fundamentalist organization was Gush Emunim (Bloc of the Faithful).

After Israel’s signing of the Camp David Accords, some members of Gush Emunim were distraught that Israel was both willing to return all of Sinai to Egypt and to discuss Palestinian autonomy in the West Bank and Gaza.  Two of their members, Yehuda Etzion and Yeshua Ben Shoshan, led the formation of the militant  group the Jewish Underground.

On April 27, after a two-year investigation, the Shin Bet (The Israeli Security Force) arrests fifteen members of the Jewish Underground who are attempting to sabotage five Arab busses in East Jerusalem.  In the subsequent days, twelve more members of Gush Emunim are arrested for a series of plots and crimes including a violent attack on two West Bank mayors, the murder of three Hebron college students, and a plot to blow up the Dome of the Rock in Jerusalem. Authorities find a cache of stolen IDF weapons and explosives in the Kiryat Arba settlement outside Hebron.

The photo shows Yehuda Etzion at a Gush Emunim outpost in 1979.