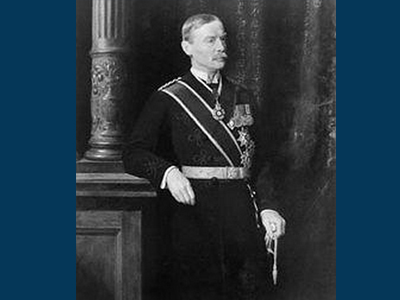 Husayn-McMahon Correspondence commences between Arabian Arab leader and the British government. Between 1915 and 1916, British High Commissioner in Cairo Sir Henry McMahon (shown in the photo) corresponded with the Sherif of Mecca, Husayn Ibn Ali, through a series of letters. In them, the British government agreed to support the Sherif’s bid for the restoration of the Caliphate (and leadership in the Arab world) in exchange for Husayn’s support of the British war effort against the Ottoman Empire. Palestine was not mentioned by name in this exchange. Husayn, however, subsequently claimed that the land of Palestine had been included in the area to be part of Arab administration assisted by the British.

During WWI, Britain, France, Russia, and Italy, allies in the war against Germany and the Ottoman Empire, established understandings and alliances with each other and with various Arab and Zionist leaders about how the Middle East would look after the war. These included the 1916 Sykes-Picot Agreement. However, these agreements — some secret, some public — were vague and seemingly conflicted with one another. A major controversy centered around whether the area of Palestine — not yet defined in specific geographic terms — was to be reserved for the Zionists to create a national home, or to be included in an area under Arab control. The controversy spilled into the public domain with the publication of the 1937 Peel Commission Report and George Antonius’s “Arab Awakening” (1938).The British in 1939 reviewed these statements, promises, and alliances and concluded that Palestine was not included in the promises made to Sherif Husayn in 1915-1916.

Read the text of the October 24, 1915 correspondence