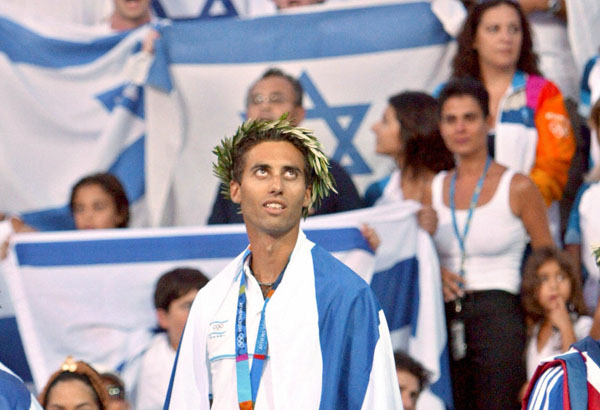 Fridman accepts his Gold medal. Photo: Inside the Games

Windsurfer Gal Fridman wins Israel’s first and, through 2020, only Olympic gold medal at the Summer Games in Athens.

Born and raised in Pardes Hana-Karkur in northern Israel, Fridman began windsurfing under the instruction of his father at age 6. Starting in his pre-teen years, Fridman competed internationally and won a variety of medals and awards. His Olympic career began at the 1996 Summer Games in Atlanta, where he won a bronze medal in windsurfing. That achievement earned him recognition as Israel’s Sportsman of the Year.

Fridman continued to win titles and medals for most of the period between 1996 and 2004, but he took a hiatus from windsurfing between 2000 and 2002 and thus missed the 2000 Summer Olympics in Sydney. In winning men’s windsurfing in Athens in 2004, Fridman not only claims Israel’s first gold medal, but also becomes the state’s first multiple medal winner. He is congratulated by many Israeli public figures, including President Moshe Katzav and Prime Minister Ariel Sharon.

Israel, which first competed in the Olympics in 1952 in Helsinki, won its first medal in 1992 in Barcelona when Yael Arad took the silver in judo. Through the 2016 Olympics in Rio, five of Israel’s nine medals are in judo.