With permission, read full article at The Israel Democracy Institute

The 2018 Israeli Democracy Index was presented today (Monday) to President Reuven Rivlin by Israel Democracy Institute (IDI) President Yohanan Plesner. The Democracy Index project, now in its 16th year, is conducted by the research team of the Guttman Center for Public Opinion and Policy Research at IDI, headed by Prof. Tamar Hermann. The study is based on a representative sample of 1,041 respondents, Jews and Arabs and examines multiple aspects of Israel’s democracy, including its structure, effectiveness and values.

President Reuven Rivlin: “Year after year, the Israel Democracy Index reveals that while Israeli citizens exercise their right and their duty to vote and have their say, they keep at arm’s length from anything connected with the very person he or she has voted for. Politics is a minefield to be avoided. All too many Israelis feel that they have no influence on the government’s policy. These data are troubling. What’s the point of casting your vote in the ballot box if you don’t believe that on the other side there’s a party or an elected official that you can trust? Democracy cannot exist without trust. We must restore trust between Jews and Arabs, between Right and Left, and between Israeli citizens and their elected officials.

Yohanan Plesner, President of the Israel Democracy Institute: “The new reality in Israel in 2018 is one in which the two political blocs—the Right and the Center-Left- are at odds with each other in their understanding of the essence of democracy, and the gaps between these two perceptions are growing wider. Nevertheless, it seems that the many Israelis who define themselves as “Centrist” may take on the new task of identifying a common denominator between these two groups, as they move farther and farther apart.”

Plesner added that “in International indices we are sitting solidly in the middle to lower end of the pack of OECD countries. Israel ranks 20th on the Economist’s Government Functioning index, along with Great Britain, Portugal and France. On the World Bank’s index on the Rule of Law which measures levels of trust among citizens in the government, Israel ranks 26th out of 35 OECD countries. As a country, we must endeavor to do and be better. There is no reason why the start-up nation, which excels in innovation and tech, should not be one of the world’s leading nations with regard to government functioning as well.”

Analysis of the index reveals that while the majority thinks that the overall situation in Israel is good and is proud to be Israeli, many are concerned as to the state of Israeli democracy. A key finding of the study on which the index is based, reveals the consolidation of the Jewish Israeli public into two distinct blocs- Right and Left-, characterized by their opposing positions on many aspects of Israeli life- not only security, but also socioeconomic, legal and religious issues as well. The Center has views which are closer to the Right on certain issues (i.e. security) and to the Left on other issues (i.e. on questions of religion and state).

Prof. Tamar Hermann, Director of the Guttmann Center for Public Opinion and Policy Research at IDI, said that “Notwithstanding the 34th government’s continuity and stability, despite the fact that it is close to completing a full four year term, and the favorable economic situation, many Israelis (predominantly from the Left and Center) feel that Israeli democracy is on very shaky ground, though others (predominantly from the Right) feel exactly the opposite. The data shows the existence of two major splits in Israeli society—one, among Jewish and Arab Israelis, on the basis of nationality—between Jews and Arabs—and the second, among Jewish Israelis, between Right and Left. The level of tension between Right and Left in Israel is on the rise. In 2012, around 9% of Jewish Israelis identified this as the most powerful source of tension in Israeli society. As 2018 draws to a close; we see a dramatic increase to 36%. Two blocs have formed within Israeli Jewish society, holding opposing views on many different aspects of Israel as a collectivity: security issues, socio-economic issues, and with regards to questions on corruption, culture, gender and liberal values. This polarization is a dangerous process, reflecting an inability to reach consensus on what is the common good.”

Israel in the eyes of its citizens: The general public’s assessment (Jews and Arabs) of Israel’s overall situation continues to be positive: 53% believe that the situation is good or very good, 29.5% think that it is “so so” and only 16% believe that it is bad or very bad. On a personal level, 80% of the public (Jews and Arabs) believes that their personal situation is good or very good (among Jews- 83% compared to 64% of Arabs) – this is up 14% in the past five years. The majority (Jews and Arabs) is proud to be Israeli (81.5%); however we see a decline among Arab Israelis for the second consecutive year – only 51%, compared to 88% among Jewish Israelis. 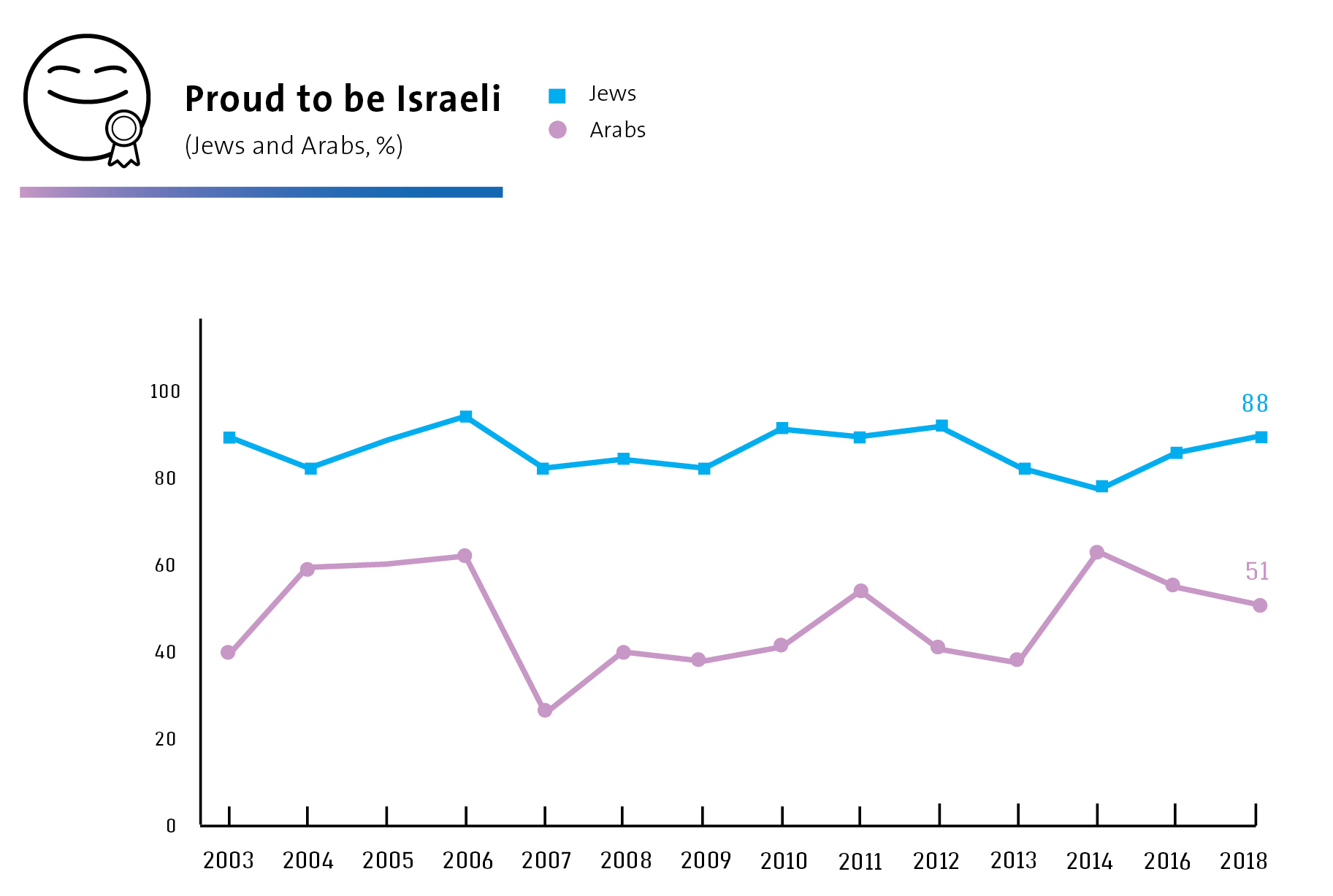 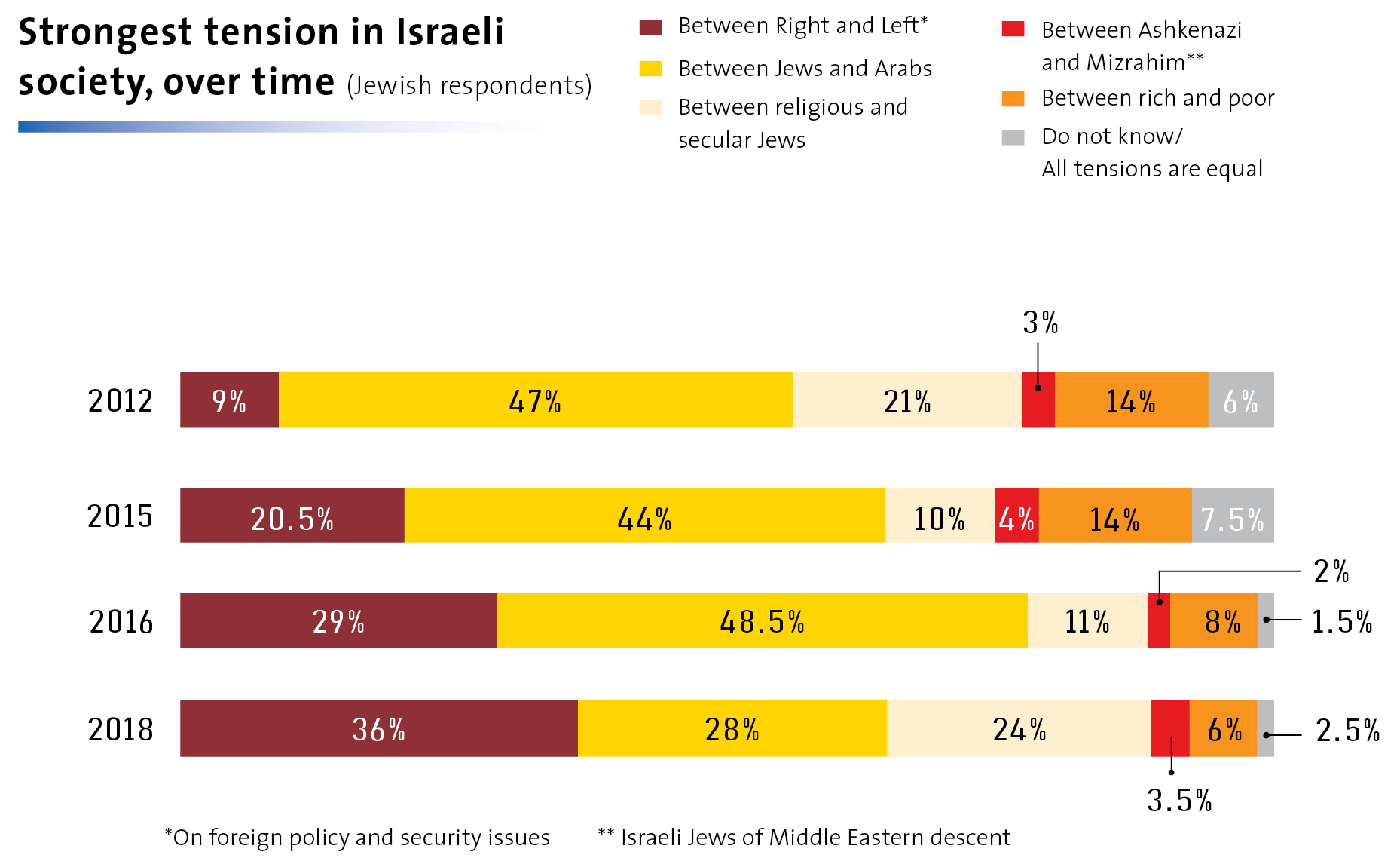 Democracy in Grave Danger: Close to half of the Israeli public (45.5%, Jews and Arabs) believes that the democratic regime in Israel is in serious danger; 70% of Arab Israelis hold this belief. It is interesting to note that 57% of secular Jews think that Israeli democracy is in serious danger, while only 13% of national religious hold this view. 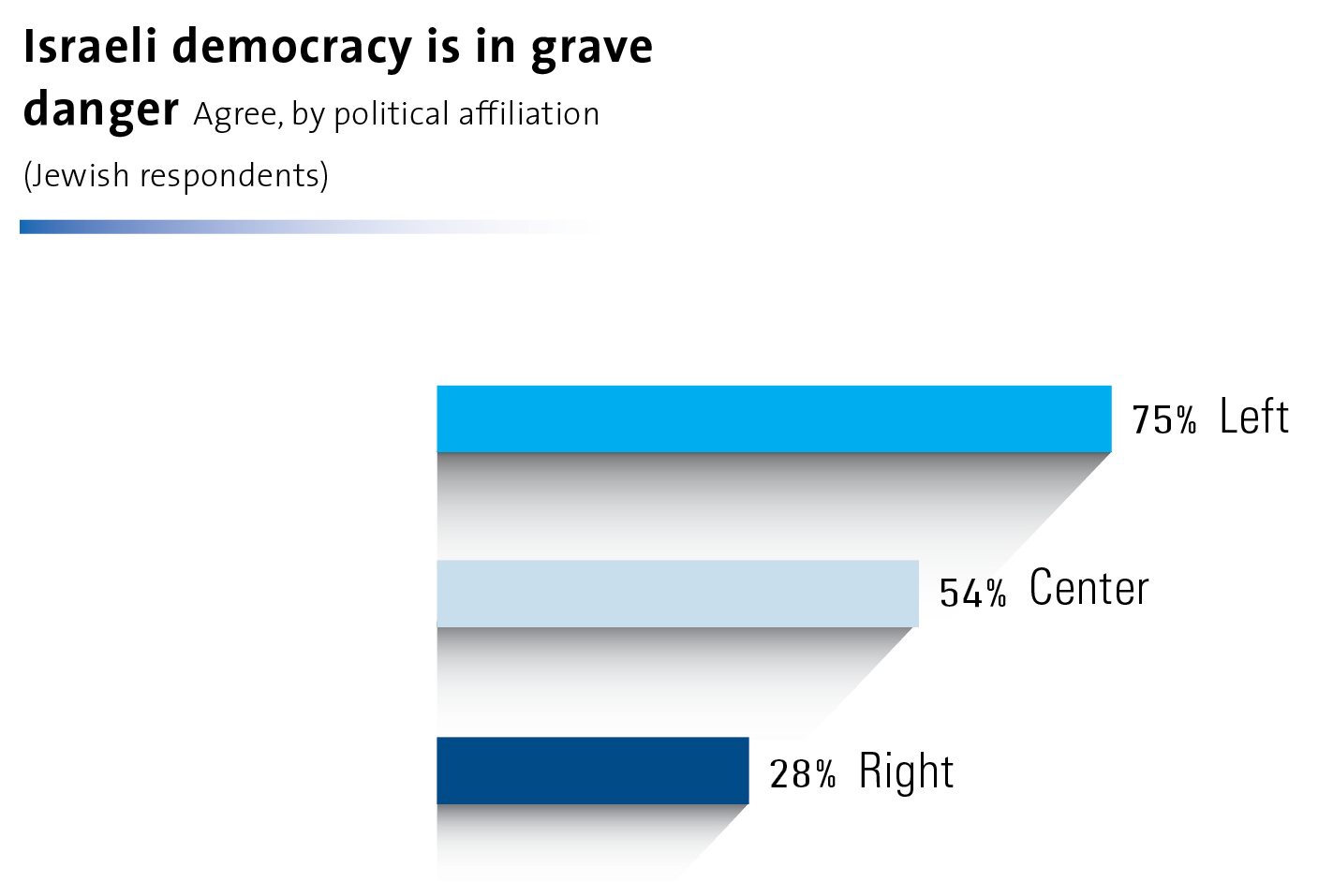 Political (dis) function: It is interesting to note that the Israeli public (Jews and Arabs) 79% feels they have little or no influence on government policy and 56% do not agree that most Knesset members work hard and are doing a good job; however this is down from 67.5% in 2017. 52% of the public (Jews and Arabs) would not advise a friend or family member to enter politics.

Closing the gender gap: a large percentage of the Israeli public (41%, Jews and Arabs) thinks that women’s status in Israel is lower than men’s (52% of women and 35% of men); while 24% think the opposite. The majority of Israelis (62%) agree that funding for political parties must be contingent on adequate representation of women in Knesset lists (67% of Jewish Israelis, 38% of Arab Israelis), and 78% believe that equal pay for equal work for men and women should be anchored in legislation (86% pf Jewish Israelis, 37% of Arab Israelis). Most of the Jewish population (73%) favors the IDF’s current policy of opening up more and more military roles to women.

Israel and the World: While according to international indices Israel’s situation is relatively good with regard to political participation, government performance and curbing corruption, Israel ranks lower with regard to civil rights and freedom of the press. In general, of the 13 indicators examined, Israel’s rank remained the same in six indicators; increased—in 4 and decreased in 3. Notwithstanding Israel’s relative good ranking in international indices, in comparison to OECD countries, Israel ranks towards the bottom of the list.

The Israeli Democracy Index was conducted for the 16th year by The Guttman Center for Public Opinion and Policy Research on the basis of a large-scale public opinion survey conducted between April-May 2018. The survey included 1,041 interviewees (851 Jews and others, and 190 Arabs) who constitute a representative sample of the adult Israeli population.