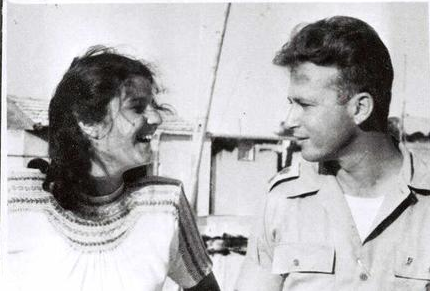 Leah Rabin, peace advocate and widow of slain Prime Minister Yitzhak Rabin, passes away at the Rabin Medical Center in Petah Tikvah after a battle with cancer. Rabin was 72 and had suffered a mild heart attack days before her passing.

Rabin’s death came a week after the country marked the fifth anniversary of her husband’s assassination at a rally in Kikar Rabin in Tel-Aviv. Leah Rabin Schlossberg was born in 1928 in Konigsberg, Germany (Today Kaliningrad, Russia) and made aliyah with her family in 1933. She met the future Prime Minister a few years later at a Tel-Aviv ice cream stand. In 1945, she joined the Palmach, the elite fighting unit of the Haganah in which Yitzhak Rabin was a leader, first serving on a Kibbutz and then working on the organization’s newsletter. She and Yitzhak were married in August 1948 during a temporary truce in the 1948 Independence War.

In March 1977, three years into her husband’s first term as Prime Minister, she became the subject of a political scandal that would ultimately lead to his resignation from the premiership. After a journalist saw her visiting a Washington bank during a diplomatic visit to the United States, it was discovered that the Rabins had maintained an American bank account, at the time a violation of Israeli law.

Following her husband’s assassination, she became an icon for the Left and the peace movement. She was especially critical of Prime Minister Benjamin Netanyahu during his first term as Prime Minister, 1996-1999.