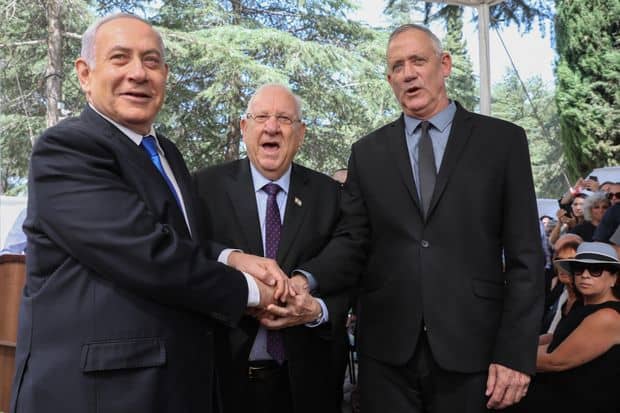 * A majority of Israelis, with the exception of the Haredim, want the party for which they voted in the September elections to join a coalition headed by Blue and White.

* The public is divided on the chances that Blue and White will remain united in case Benny Gantz fails to form a government. This is a change compared to a previous survey (April 2019) that found a majority expecting the party to split up.

* Unlike in the past, about half of the Israeli public now thinks Israel’s security is not a key consideration for President Trump when deciding on the direction of U.S. foreign policy.

* A majority of the Jewish public is in favor of providing humanitarian aid to the Kurds in northern Syria in the wake of the U.S. forces’ withdrawal from the area, despite the danger of worsening Israel’s relations with Turkey. However, only a minority favors providing military assistance to the Kurdish forces who are fighting there.

* A majority of Israelis think that despite the dangers posed by climate change, there are more important issues for governments to address—for example, the issue of security or of economic disparities. At the same time, the young age groups ascribe greater importance to dealing with climate change than do the older age groups.

* Even though, when making purchases, a majority of Israelis are more concerned about the price of the product than about the environmental harm it may cause, the majority favors a law that would prohibit the sale of disposable dishes because of how they pollute the environment. This is with the exception of the Haredim, a majority of whom oppose such legislation.

The future of democracy and of national security – Apparently in light of Netanyahu’s failure to form a government and the feeling in the Israeli public that Gantz, too, will have a hard time doing so, as well as the sharp disputes surrounding the State Attorney’s Office and other law-enforcement bodies, this month a decline was measured in the degree of optimism about the future of Israeli democracy compared to last month (43% vs. 47%). On the other hand, the slight rise in optimism about the future of national security continues (54.5% compared to 53% in the previous month). As the diagram below shows, a trend may be emerging in which the two variables are pulling apart: an improvement in the perception of Israel’s security future and a decline in the perception of its democratic future.

A segmentation of the responses by political camp (Jews) shows that the majority of those who defined themselves as left-wing (70%) are pessimistic about the future of democracy, while on the right 53% are optimistic. In the center, 50% are pessimistic and 34% are optimistic. As for the future of national security, in all three camps optimists are the majority, and the differences in the size of this majority are not large. In other words, there is agreement across the camps on the issue of security –and deep disagreement while on the issue of the future of democracy.

Support for joining a government headed by Benny Gantz – We wanted to know whether, at this time, Israelis want or do not want the party they voted for in the recent elections to be part of a coalition headed by Blue and White and its leader Benny Gantz. The survey findings indicate that the majority wants their party to be a member of a Gantz-led coalition (62%). A segmentation of the results by voting in the recent elections shows that voters for Blue and White and for the left (Labor and the Democratic Camp) want their party to join a coalition headed by Gantz (86%-95.5%). High support for this was also found among Joint List voters (75%). A slightly smaller rate, but still a large majority, was also found in Avigdor Liberman’s party, Yisrael Beiteinu (67%), while Liberman still insists that his party will join only a national unity government. The picture is different for Likud and Yamina voters, less than half of whom want their party to be part of a coalition led by Benny Gantz (48%-49%). Those who do not favor joining a coalition headed by Gantz are voters for the Haredi parties, of whom only a minority would want it (Shas 32%, Torah Judaism 29%).

Agree that the party I voted for join a coalition headed by Benny Gantz (general public, %)

Will Blue and White split up? The Israeli public is divided on the question of whether the Blue and White Party will split up if Gantz’s efforts to form a government fail, or if, even in that case, it will remain united (40% think it will, 40% think it will not). Not surprisingly given the nature of the question, a relatively high rate (20%) said they did not know. This is an interesting result – and positive from the standpoint of Blue and White considering that, after the April 2019 elections, the majority (55%) estimated that the party would not survive.

A division by political camps shows that on the left, the majority (60%) thinks Blue and White will not split up, and the same is true for the center though here the majority is smaller (50%). On the right, however, the rate of those who believe the party will fall apart is larger than the rate of those who think it will remain united. Among the Arabs, 48% think the party will stay united and 34% expect it to split up.

An analysis of the responses by voting in the recent elections shows a majority who say the party will split up among voters for the following parties: Torah Judaism, Shas, Yamina, and Avoda-Gesher. Among Blue and White voters, only about a fifth sees a breakup on the horizon.

High or moderately high chances that the Blue and White Party will split up in case Benny Gantz fails to form a coalition (general public, %)

The people want unity – We asked: “In light of the difficulties in forming a coalition of 61 members of Knesset, which solution do you now see as preferable?” We found that a small majority wants a national unity government (53%), 17.5% want elections, while 13% want a minority government to be formed.

No large differences were found between the three political camps (Jews) in the degree of support for a unity government (64.5% in the center, 60% on the right, 57% on the left). The disparity turns up with regard to the next possibility: whereas on the left and in the center the second largest group prefers a minority government (20% and 16%), on the right it prefers another round of elections (20%).

To what extent, in your opinion, is Israel’s security now a central consideration for President Trump when formulating U.S. foreign policy? (Jews and Arabs, % 2017 and 2019)

We found an interesting relationship between assessment of the centrality of Israel’s security in President Trump’s considerations and degree of optimism about the future of Israel’s national security: among those who think this consideration is not a major one for the U.S. president, only half are optimistic about the future, while among those who think Israel’s security is a central consideration for him, about two-thirds (65%) are optimistic about it.

Aid to the Kurds

We asked: “Should or should not Israel provide humanitarian aid to the Kurdish civilians in northern Syria after the U.S. forces’ withdrawal from there, despite the fact that this could worsen Israel’s relations with Turkey?” A majority of the interviewees (54%) responded positively (the rates of Jews who favor providing such aid is higher than the rate of Arabs: 55% vs. 47%).

And what about military assistance? We asked: “If the Kurdish forces fighting in northern Syria, after the U.S. forces’ withdrawal from there, request military assistance from Israel, should or should not Israel agree to this, despite the fact that it could worsen its relations with Turkey?” Here only a minority responded positively, but this minority was larger among the Jews than among the Arabs (39% vs. 24%).

Providing humanitarian and military aid to the Kurds in northern Syria (Jews and Arabs, %)

We wanted to know whether mention of the fate of the Kurds in northern Syria affects the assessment of President Trump’s commitment to Israel’s security. Accordingly, we divided the sample into two groups. The first group was asked the question before the questions about aid to the Kurds, and the second group was asked the question afterward. While, indeed, in both cases the majority answered that the Israeli-security consideration is not central to Trump, we found that mentioning the Kurdish case before the question raised the rate of those who do not see the Israeli-security consideration playing an important role for Trump from 48% to 55%.

Lately the issue of environmental protection has played a prominent role in the international public and media discourse, to a large extent around the figure of the Swedish girl Greta Thunberg. Because that issue, however, has not been a central concern in Israel over the years, we looked into whether a change has occurred in awareness of the climate issue.

The next diagram shows that age is the most influential variable for perceptions on this issue: the young people are more worried about climate change than the adults and ascribe greater political importance to it. In the young age group there is almost no difference between Jews and Arabs, which suggests that the issue is a “generational concern.”

Should climate change be at the top of the order of priority of the world’s governments? (Jews, Arabs, distribution by age, %)

Notwithstanding that the environmental consideration is secondary when buying products, a majority of Israelis (58%) in fact support a legal prohibition on selling disposable dishes that pollute the environment, compared to 35% who oppose such legislation.

Degree of support for and opposition to passing a law that would prohibit the sale of disposable dishes (Jews, distribution by religious definition, %)

The Israeli Voice Index is a project of the Guttman Center for Public Opinion and Policy Research of the Israel Democracy Institute. In the survey, which was conducted on the internet and by telephone (supplements of groups that are not sufficiently represented on the network) from October 24 to October 29, 602 men and women were interviewed in Hebrew and 151 in Arabic, constituting a representative national sample of the entire adult population of Israel aged 18 and older. The maximum sampling error for the entire sample was 3.7%± at a confidence level of 95%. The fieldwork was done by the Rafi Smith Institute under the direction of Rafi Smith. For the full data file see: https://dataisrael.idi.org.il