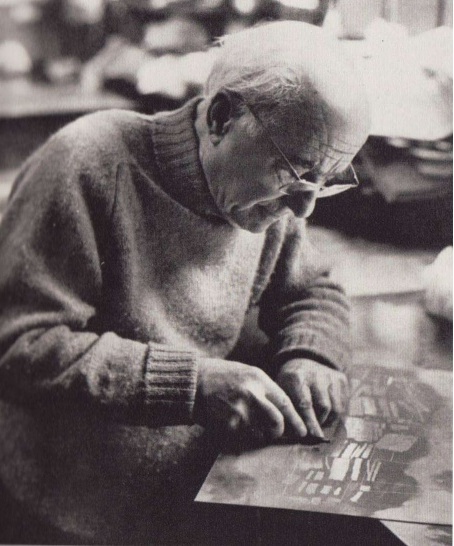 Mordecai Ardon, one of Israel’s best-known painters, dies at age 95 in Jerusalem.

Born Max Bronstein in Galicia in 1896, he ran away from his religiously observant family at 13 and wandered Europe before studying acting in Berlin after World War I. When he switched to art and applied to the Bauhaus school, he immediately attracted Paul Klee as a mentor and studied with Johannes Itten, Wassily Kandinsky and Lyonel Feininger. In 1926 he moved to Munich and studied with Max Doerner for three years. He returned to Berlin for a time, then fled to Prague to escape trouble over his involvement in communism.

He moved to Jerusalem in 1933 and changed his name to Mordecai Ardon in 1936. He was drawn to the earth of Palestine but struggled to adapt to the harsh light. His work evolved to feature symbolism, including Kabbalah, and to depict the connections between the visible and the invisible. Rather than work in pure abstraction, Ardon began with realistic pieces and abstracted them as he worked. Some of Ardon’s most famous works featured symbolic representations of Nazi soldiers and imprisoned Jews during the Holocaust.

Considered the father of the regional approach to art in Israel, he was committed to teaching. He was an instructor at the Bezalel School of Arts and Crafts (now the Bezalel Academy of Arts and Design) from 1935 to 1952 and served as the school’s director from 1940 to 1952. He was a supervisor and art adviser for the Education and Culture Ministry from 1952 to 1963.

Ardon was awarded the UNESCO Prize in 1954 and the Israel Prize in 1963, but it wasn’t until he retired from teaching at age 65 that he devoted himself to painting full time while splitting time between Paris and Jerusalem. One of his most famous works, created for the Hebrew Library, is a stained-glass window, “Isaiah’s Vision for Eternal Peace.”