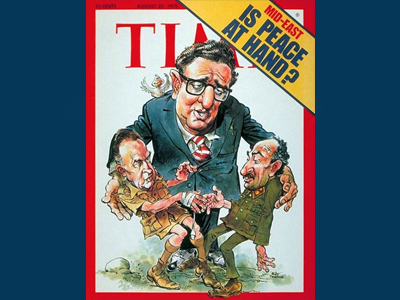 Israel and Egypt sign the Second Disengagement Agreement (Sinai II) in Geneva, Switzerland on September 4, 1975. US Secretary of State Henry Kissinger, engaging in shuttle diplomacy, helped Israel and Egypt negotiate the first disengagement agreement following the October 1973 Yom Kippur War. In that agreement, signed in January of 1974, Israel withdrew from the western bank of the Suez Canal and Egypt reduced the number of troops on the eastern bank.

In March 1975, Kissinger began another round of shuttle diplomacy aimed at disengagement in Sinai. While Israel’s Prime Minister was reluctant to cede any territory in Sinai, Kissinger and President Ford applied pressure on Israel by suspending arms deliveries. After meetings in Washington and Israel, Rabin agreed to renew negotiations in August. The agreement signed on September 4th included Israeli withdrawal from the Abu Rudeis oil fields and the Mitla and Gidi passes as well as the creation of a UN monitored buffer zone.

In persuading Israel to sign the second disengagement agreement with Egypt, Kissinger promised not to negotiate with the PLO until it recognized Israel, accepted the legitimacy of UN Security Council Resolution 242, and renounced the use of terrorism.

The photo below is the cover of Time Magazine from August 25, 1975 with caricatures of Kissinger (center), Rabin (left) and Sadat (right).