On October 6, 1973, Egypt and Syria launched a surprise attack against Israel on the Jewish holiday of Yom Kippur.

Backed by arms from the Soviet Union, Egypt and Syria made significant territorial gains in Sinai and the Golan Heights. By the war’s end three weeks later, aided by military supplies from the United States, Israeli counterattacks proved successful. A UN applied ceasefire took effect and a brief Middle East Peace Conference was held in Geneva in December.  Despite mistrust between the sides, Egyptian President Sadat and Israeli Prime Minister Meir used the war to usher in a period of American-led diplomacy.  Israelis critically investigated their failures in preparing for the war; their inquiries resulted in both the resignation of high ranking officials  and in revision of Israel’s military readiness procedures.  No treaties were signed at the end of the war, only military disengagement agreements. The diplomatic aftermath of the war evolved slowly into more detailed, secret, and direct Egyptian-Israeli diplomacy  which resulted in the 1979 Israel-Egyptian Peace Treaty. 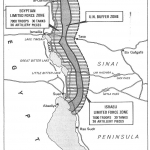 A Map of Israeli-Egyptian Separation of Forces Agreement Map, 1976. Source: A History of Israel: From the Rise of Zionism to Our Time. By Howard Sachar. New York: Alfred A. Knopf, 1976.